The little green box sits in a drawer now, a fine layer of dust collecting from god knows where.  I do not open it anymore.  I know he is not in there.

I thought I’d said goodbye long before I really did.

But that was not goodbye…in my heart, I was still saying hello.

The last time I held him he had been dead twelve hours, lividity darkening one side of his small face.  I waited for them to bring him to me, shy and eager as if before a date.

I remember most the adrenalin taste of my anticipation, the leap in my heart even though I am a sane-ish sort and the joy I felt awaiting him feels ridiculous, even macabre in the recounting.  But I did not believe he was alive: more that life and death were irrelevant, for a minute.

It seemed enough that he was himself, and would be with me again.  I think I thought that I wanted to say goodbye, though I couldn’t have said those words aloud then … too maudlin.

I think now that I was wrong, that goodbye was nowhere on my radar.  I just wanted my baby.  And I would want him with a keening ache for a long time after.

Our culture tells us that goodbye comes with death, or at the very latest with the last leavetaking of the body of the departed.  The dead leave visible holes in the fabric of our lives, and we know them gone by the gaps.

But with babies, especially those who never came home at all, the thresholds are blurred.  Waiting for a baby, a parent’s life and selfhood shift to accommodate the coming addition … but the changes are private, woven in secret thread, invisible. 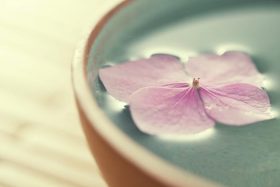 RELATED: A Mother Reflects On “How Long Grief Lasts” After Pregnancy Loss

When the baby dies, the leave taking comes hand in hand with – or before, or in place of – that first magical hello, and all the anticipation and identity shifts of the parent-to-be are left hanging, shredded, irreconcilable with the fabric visible to the outside world.

The usual rules of goodbye suggest that the absence of someone who was barely, in fact, present should be a simple thing.

But if it were, this corner of the Internet would be a lonely place.

Pieces of goodbye crept up on me, crowded in.  Each time I called him into being aloud, spoke the reality of his death, he slipped a little further from me.

Each time realization fell and the obvious clicked: that I would never see what he would have looked like as a five year old, that I that there would never be a photo of all my children – if I eventually had other children – together.

Each one tore at me, ripped open again the wound where all the futures I’d woven for us had been.  Each one was invisible to the outside world, unremarkable to anyone who did not realize that my heart still held him whole long after his body had been relinquished to the fire.

I knew he was gone, knew it in every part of me … my spread hips, my leaking breasts, my empty, searching hands.  But it was the rituals of living without him that forced me to acknowledge what I knew, internalize it.  Each time I moved forward without him, I let go a little.  And I hated that.  We had had so little time, he and I.

Then one day I opened the little green box to finger his small hat and when I held it to my face to breathe him in all I smelled was dust.  No trace.  And I sat, alert, surprised, as if suddenly realizing that he’d been gone a long time.

I felt … odd, caught out … as if someone might be watching, as if I’d been discovered mothering a box.

Are you there, little one?  I whispered.

No answer.  And it all clicked into place.

I felt the shift deep inside me, just as I’d felt it all those months before as I waited for motherhood … the quiet sea change where what was once incomprehensible becomes, simply, who you are.  Still a mother.  To a child I’d never see again.  There it was: Goodbye.

And yet I felt him, too, closer then than I had in a long time, that brightness and sweetness of the moments holding him in my arms.  You’re gone, I said quietly.

For more information about coping with the loss of a baby, please visit:

You can also follow our Pinterest board for more resources on coping with child loss, miscarriage & pregnancy loss.